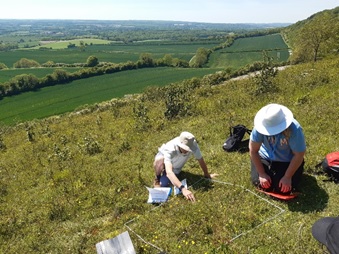 A typical day at the office OCND style?

By Jackie Williams and David Rowlands

Volunteering this summer with the OCND project made scrambling on hands and knees on steep meadows the new office for two late career changers. Summer surveys are needed to identify the special, but declining, chalk grassland flowers. We were alongside more experienced hands, but constantly reaching for books and hand lens to key out flowers and asking question like ‘does that look hooked or barbed’ or ‘is it hairy’, bringing a new appreciation of this unique habitat. After Zoom lectures and limited opportunities to volunteer in 2020, spending the summer of 2021 on the slopes of the North Downs was a joyful as well as an educational experience.

With training in rapid assessment survey methods under our belts and equipment packed, we spent hot days on steep slopes and saw many hidden gems.  Seeing in practice the work involved in regenerating Kent’s chalk grassland highlighted the importance of working with landowners to ensure their ongoing maintenance.

Following clearance and fencing works, conservation grazing was in progress at Boxley Warren. Grazing is crucial to creating a species-rich habitat mosaic, and preventing dominant scrub species from dominating. Despite the efforts of the Herdwick Sheep we saw a wide variety of flora, including several orchid species (Bee, Pyramidal and Spotted) at the site. 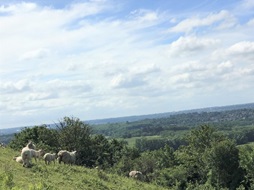 The long-term care of these chalk grasslands passes to the landowners, so helping them understand ongoing management such as grazing regimes, is essential to restoring these habitats. 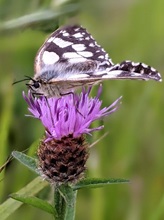 Many insect species are dependent on diverse chalk grassland. Amongst our sightings were common and  Adonis blue butterflies, day flying moths (such as the mint moth) , bees (white-tailed and buff), wasps and Hover flies.

As the summer wore on, each quadrat was a chance to improve ID skills, but also witness the progression of the plant as the leaves, flowers and finally seeds emerged. New finds were interesting especially as some were only seen at certain sites. The Carline thistle (Carline vulgaris) was at its best towards the end of its cycle; the final golden colouring prevailed as it ‘went over’. 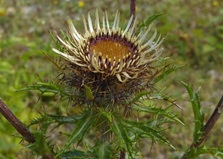 There are many favourite moments but what could be better than the scent of Wild Thyme (Thymus polytrichus) released by walking through the large vibrant purple patches at Boxley Warren, as we sought out the next quadrat.

Many thanks to Jenny, Lyndsay, Hannah and Rachel for their generosity of knowledge and providing the opportunity to work with these important habitats.

Back to blog
Our final hedgerow was planted near Bredhurst earlier in the Spring, connecting this arable field to nearby hedgero… twitter.com/i/web/status/1…
Follow us on Twitter