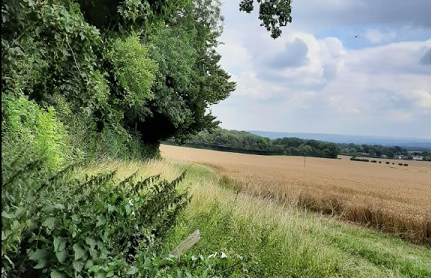 A hedgerow is defined as any boundary line of trees or shrubs over 20m long and less than 5m wide at the base. Whilst this is the standard description of a hedgerow, it does not paint a very exciting picture or do justice to the extraordinary benefits hedgerows provide the environment, wildlife and people alike.

Dormice, Dunnocks, bumblebees and bats are just a some of the thousands of species that call hedgerows their home. This diverse habitat creates corridors connecting the landscape, making highways for wildlife to travel through safely. Hedgerows help to prevent soil erosion; they’re natural flood barriers, they’re a food source for people and wildlife and they provide much needed shelter for livestock. There are so many benefits to hedgerows its astounding to think that we remove them.

Humans have been creating hedgerows as far back as the bronze age when farmers cleared the land for crops often leaving a line of trees to mark their lands boundary. Planting of new hedges dates back to Roman times and continued to the mid-18th century when the Enclosure Act came into force and hedges were heavily planted.

It has since been recognised that the removal went too far. Many remaining hedgerows have also suffered from miss management, harsh cutting, no management and chemical drift from agriculture pesticides/herbicides resulting in hedgerows becoming defunct.

But there is hope for Britain’s hedgerows! In England and Wales, the Hedgerows Regulations 1997 helps to protect certain types of hedgerows from destruction and removal although the legislation is complicated, and many people feel it does not go far enough. There are now government grants through the stewardship scheme to plant and manage hedgerows and since the 1990’s there have been a steady increase in hedgerow awareness through projects designed to protect them.

This year the old chalk new downs project is supporting landowners to plant, gap up and manage hedgerows through our connectivity grant. We are also carrying on our hedgerow condition assessment with our wonderful group of volunteers. Whilst our project primarily focuses on chalk grassland, we know that by doing this we will build connectivity back into the countryside, help secure the landscape reconnect people with nature and strengthen the local environment.

Find out more about our project and Habitat Connectivity Grants.