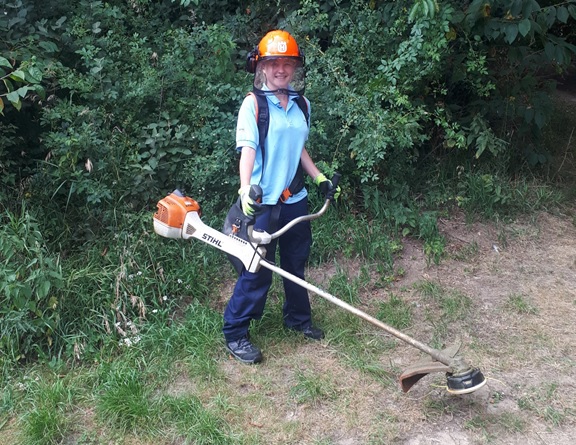 Hi, my name’s Hannah and for the past three months I have been working as OCND’s new Kent Country Parks Trainee based with the awesome ranger team at the beautiful Trosley Country Park. Having recently graduated from an ecology and conservation course at university, I jumped at this opportunity when it arose (even though it was voluntary!), knowing that it would give me the practical skills and experience to get my foot in the door of the wildlife conservation sector. And what skills and experiences I have gained so far...!

With the ranger team at Trosley also covering four other gorgeous country parks and conservation areas – Lullingstone Country Park, Teston Bridge Country Park, Dry Hill and Preston Hill, there was a lot to take in, with each area housing an array of incredible organisms such as rare orchids, butterflies, birds, reptiles and ancient trees. It was very clear I was going to learn a lot and be kept extremely busy!

I was lucky to have my first day fall on a Wednesday, which meant volunteer day! I have had the pleasure of working with volunteers before and what I’ve learnt is that organisations like Kent Country Parks would really struggle to survive without their volunteers! I found out it was much the same at Trosley, where our volunteers have allowed us to carry out and finish tasks in a fraction of the time. From clearing vegetation around a World War One firing range, to pulling out poisonous ragwort (luckily not poisonous to humans but to livestock, so it still has to go), to spending a whole day digging out, replacing and adding new way markers (we all definitely slept well that night!), the enthusiasm and never-ending energy of our volunteers has been inspiring. 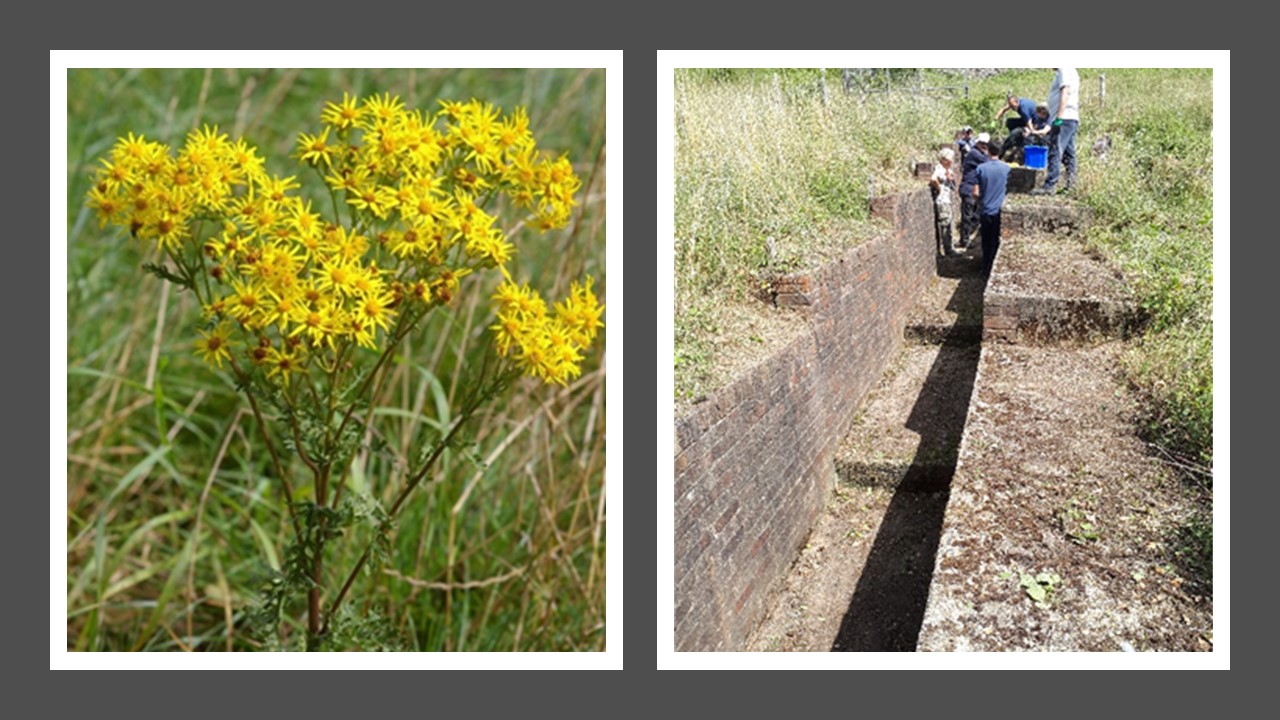 I had never done anything like wood processing before, so I was slightly nervous but eager to get stuck in! Coppicing is a valuable conservation practice; it opens up the woodland and allows precious light to reach the woodland floor meaning a more diverse range of species can flourish. Of course, then you have a whole load of potentially valuable wood leftover. Here is where the wood processing comes in. The rangers at Trosley use the wood to create boiler logs for their own buildings’ boiler, as well as selling the wood as fire logs and kindling. This in turn helps to finance the country parks and the conservation that goes on there (and the rangers that do it!). Learning to use the wood processing machines (there is one for making the logs and one for the kindling) has been challenging but great fun; from (ashamedly) getting the first load I ever made just 2mm too long so we weren’t able to fit them in the kindling machine to almost breaking the machine by getting the saw stuck in logs to finding out you’ve managed to help make over 90 bags in a day! It has absolutely been a rewarding task (at least when it all goes to plan!). 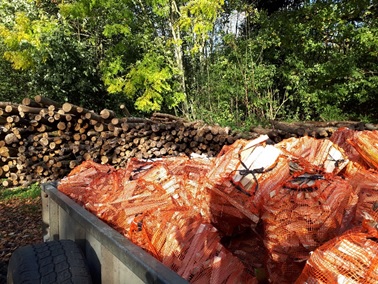 As I started in August, sadly I missed the majority of the surveying season but, luckily, I was able to get involved in a few before the season was truly done.

My first was a reptile survey – Trosley has six reptile survey points where they’ve placed square pieces of corrugated iron. This makes for great spots for reptiles to warm themselves and regain their energy. I took part in three different surveys which involved lifting the squares to check if anything was hiding underneath and was rewarded with seeing; an adder, a lizard and a slow worm (which was super exciting as I had not ever seen one in real life!).

The second survey I took part in was a vegetation survey to assess the condition of one of the Preston Hill fields. This is the newest addition to the Trosley collection so I was looking forward to seeing what we might find there. We were using the OCND’s chalk grassland condition assessment guidelines, so we plotted nine points of 1 metre squared quadrats along a W shaped route trying to cover at least 50% of the field. We then spent the day recording positive and negative indicator plant species, as well as wildflower coverage and sward height. We found a good amount of positive indicator species, including some interesting wildflowers like Dwarf Thistle and Bird’s Foot Trefoil (so named as its leaves look uncannily like that of a bird’s foot). Sadly, we did not find as many as we hoped but we were doing the survey a little late in the season so this was to be expected. Mainly I discovered that it is incredibly hard telling a lot of plant species apart (it sometimes came down to which way the hairs on the leaves were facing!) and that I definitely have a long way to go in my plant species identification.

I also had the pleasure of helping with a butterfly survey during one of our last sunny days this summer. The survey process involved walking through the park with an invisible window in front of you of 2.5 metres either side and 5 metres high. Any butterfly that would fly into this window would be recorded and then uploaded to an online database. I learnt that the Meadow Browns are the most common at Lullingstone but that other butterflies can be easily mistaken for them, such as the Gatekeeper butterfly. This butterfly can sometimes be distinguished by its more vibrant orange colour but this Is hard to see from afar. It also has 2 white dots surrounded by black on the wings, whereas the Meadow Brown usually only has one white dot, although it can sometimes have two… basically these butterflies are very hard to tell apart! We also managed to see a blue butterfly that was possibly a Common Blue but could have also been the even more impressive Chalkhill Blue. As you can imagine, this survey method has a slight flaw in that it is quite hard to discern minute details between butterflies while their tiny wings are speeding them past your face!

One of the best parts about my traineeship is working the goats. The closest I had come to working with livestock before this was trips to a petting zoo as a toddler, so I was definitely looking forward to getting to work with these guys! Livestock can be a great conservation tool through conservation grazing, especially for grassland meadows. This means they help to keep all the larger, unfavourable plant species like ash and hawthorn, that can invade grassland meadows, at bay and allow herbaceous and wild-flower plants to flourish. This not only increases plant biodiversity but also attracts a plethora of insects and therefore birds, reptiles and mammals, all in a natural and undisruptive way. At Trosley we have 40 goats (there was not meant to be this many but male goats will be male goats and so 10 new faces appeared last year unexpectedly!), who are moved continuously throughout four different fields to avoid overgrazing and to keep the goats full and happy. They have already done amazing work in the fields, that are all SSSIs for grassland, helping move them towards a more favourable condition for grassland meadows and will continue to be an essential part of the ranger team! From sliding all the way down hills on their stomachs to getting stuck in quarries to dragging us across mud-ridden landscapes while we are trying to vaccinate them, there is absolutely never a dull moment working alongside these comedic creatures. 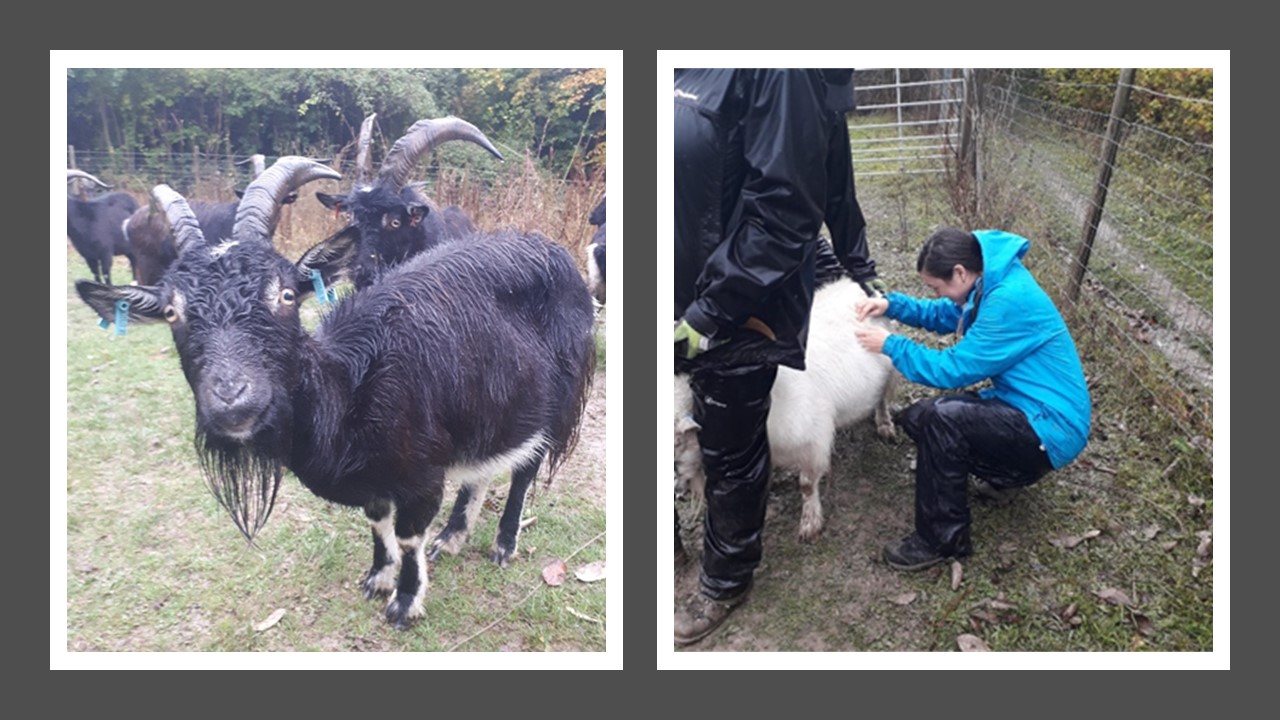 There is so much that I’ve gained from this traineeship already and so many stories, but keep your eye on this space… I’m only halfway through and if the first three months are anything to go by there is some exciting stuff in store…!